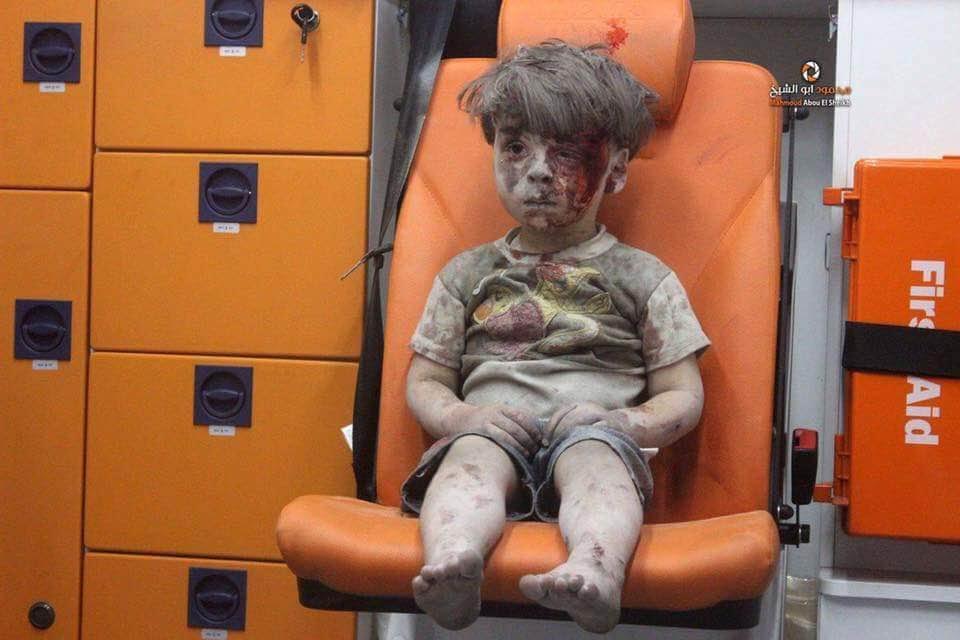 The above picture went viral the moment it hit social media. It shows a young child, Omran Daqneesh, after he was pulled from the rubble of his house after an airstrike in Aleppo, Syria. Aleppo is the largest city in Syria and the site of the most intense fighting in the Syrian Civil War. The war there has raged since 2012. The picture humanized the war for many who may have forgotten the Syrian Civil War. CNN anchor Kate Bolduan was brought to tears attempting to describe the picture and story for viewers:

This isn’t the first time pictures involving Syrian refugees have rocked the world. Repeated pictures have made front pages showing dead children washing up on European beaches. The children, fleeing the destruction in Syria with family and friends, end up drowning when their boats capsize crossing the Mediterranean Sea.

It is estimated that nearly 12,000 refugee children have met similar fates. Some of have been executed. Others tortured. Fortunately for Omran, both he and his family survived the air strike. However, his 10 year old brother, Ali Daqneesh, did not. He was rushed to an ambulance and died from his wounds. UNICEF estimates there are over 100,000 children in Syria facing similar threats. Their families and friends face similar circumstances.

Omran is the face of the Syrian Civil War. Both ISIS and Syrian President Assad have killed innocents. ISIS through executions, torture, and raids. Assad through chemical weapon attacks and airstrikes. This isn’t simply a case of collateral damage. ISIS and Assad have specifically targeted civilians.

So why are we here? American inaction in Syria. This isn’t a case where we haven’t “done enough.” It’s a case of not doing anything at all. Official US policy right now regarding Syria is that of a blind eye. You can see it in the hypocrisy of the White House’s statements. President Obama has laid out his foreign policy philosophy in several interviews. One of the most enlightening was the following passage in an interview with The Atlantic:

“I am very much the internationalist,” Obama said in a later conversation. “And I am also an idealist insofar as I believe that we should be promoting values, like democracy and human rights and norms and values, because not only do they serve our interests the more people adopt values that we share—in the same way that, economically, if people adopt rule of law and property rights and so forth, that is to our advantage—but because it makes the world a better place. And I’m willing to say that in a very corny way, and in a way that probably Brent Scowcroft would not say.

The President is arguing he is what’s called a foreign policy “realist.” He believes American power only stretches so far and we shouldn’t involve ourself unnecessarily in places where the US does not belong. That is a very basic definition of a realist. Those who defend him say that a realist would not go into Syria because there is no moral or realist case to be made for Syrian intervention.

But in the case of Syria, the Obama administration specifically argued the US has a duty to respond to the Syrian people:

In making their case for a U.S. response though not establishing a timetable, Obama and Kerry cast the situation as a matter of national security in controlling chemical weapons, and as a moral imperative for the United States to stand up to rogue nations.

“We cannot accept a world where women and children and innocent civilians are gassed on a terrible scale,” Obama said at the White House, calling the attacks a violation of well-established international norms that threatened U.S. allies in the region such as Israel and Jordan.

“History would judge us all extraordinarily harshly if we turned a blind eye to a dictator’s wanton use of weapons of mass destruction,” Kerry said in a televised appearance at the State Department.

“So the primary question is really no longer, What do we know? The question is, What are we – we collectively – what are we in the world gonna do about it?” Kerry said.

Since then? Nothing. It’s been 5 years since President Obama called for Assad to step down. Assad is still in power. Obama has allowed Russia to reinforce Assad in power. This while Assad has purposely attacked doctors and other crucial infrastructure of his people (95% of the doctors have been forced out of Aleppo, Omran’s hometown). And on the other side of the conflict is ISIS. They spend their time kidnapping, raping, executing, and torturing men, women, and children.

The President made the case for why Syria mattered, both as a moral intervention and as a threat to US security interests. He also made the case that instability in Syria threatened our allies in the region and risked destabilizing other areas. He has thoroughly made the case for intervention and I agree with him. [1. It is worth noting here that I have not always supported this view. In 2012 I specifically opposed intervention and rejected the Administration’s argument. I’ve since come to believe I was wrong on this point. The key for me is containing and pushing back disastrous Russian intervention in the region. Vladimir Putin does not have America’s best interests nor her allies at heart when he intervenes. The US needs to check these power moves and contain Putinism.] Yet he has decided to turn a blind eye to these atrocities.

Why are we at this point? I think Tom Rogan has the best insight here:

So why has Obama abandoned liberal humanitarianism? I think there are three reasons. First, the president’s strategic vision is seared by America’s suffering in Iraq from 2003 to 2006. This is why he wouldn’t support the surge as a senator, and why he had no interest in preserving a U.S. presence in Iraq after 2011. Second, and as an extension to the first point, Obama believes that foreign populations must resolve their own problems without America’s help. Obama seems to think that American hesitation will force consensus among warring parties abroad. Third, Obama holds that the American-led international order is best sustained by global institutions and mutual economic interests. The president seems to trust that America’s military deterrence is absolute — we have no need to make any show of force. This is why President Obama appears confident that supplicant diplomatic pressure will eventually deter Chinese, Iranian, and Russian aggression.

Regardless, the decline of liberal humanitarianism is now undeniable. To be fair, if the president were correct in his self-assessment as a realist, this wouldn’t be a problem. But in 2015, American foreign policy is largely disconnected from American values, leaving a power vacuum in troubled regions around the globe. And that vacuum is fueling a belief among allies and foes alike that Obama’s realism is — put simply — fundamentally un-realistic.

To put it blunt: our current policy is not based in realism. It’s an abdication of our role in Syria. A realist stance would find a way to contain Assad, Russia, and ISIS while helping Syrians flee their country. Or at the least, contain the problem and send humanitarian aid. [2. Containment does not always involve military action. There are many actions we can take without resorting to boots on the ground as the only option. Pretending we don’t have options is a farce.] Instead, ISIS has spilled into other countries and is actively inspiring attacks abroad. Russia is meddling across the region and expanding their influence. And Assad has retrenched his power and is actively using chemical weapons again. This area is far from contained and allows threats to metastasize.

We may not have “boots on the ground,” but that does not mean we’re not actively engaged. Pretending that boots on the ground is a magic line that gives us the ability to engage and disengage at will is unrealistic. We are engaged. Our inaction and moral acquiescence during a humanitarian disaster is a blight on American values.

Our leaders cannot feign moral outrage at photos like Omran Daqneesh. Our leadership claims both the power and moral authority to act and does not. We’re not taking even the bare minimum steps to contain these atrocities. This administration has taken a blind eye to a genocide. As John Kerry said, history will judge them on that point. An objective truth-based morality does the same. The US should pursue policies that reduce the number of Omran pictures we have to see before finally acting.

Sign up for our weekly email: The Outsider Perspective!